Caldwell reigns as a top contender for bench shooters. Between their bags, weights, and shooting rests, they've got most ranges and rifles covered. But their entry-level Lead Sled Solo (Sight-In Edition) shooting rest is one of their most affordable entrants in a long line of accessories and sleds. Does it stack up to other affordable units? We're taking a closer look today with an in-depth review.

The Lead Sled Solo at a Glance 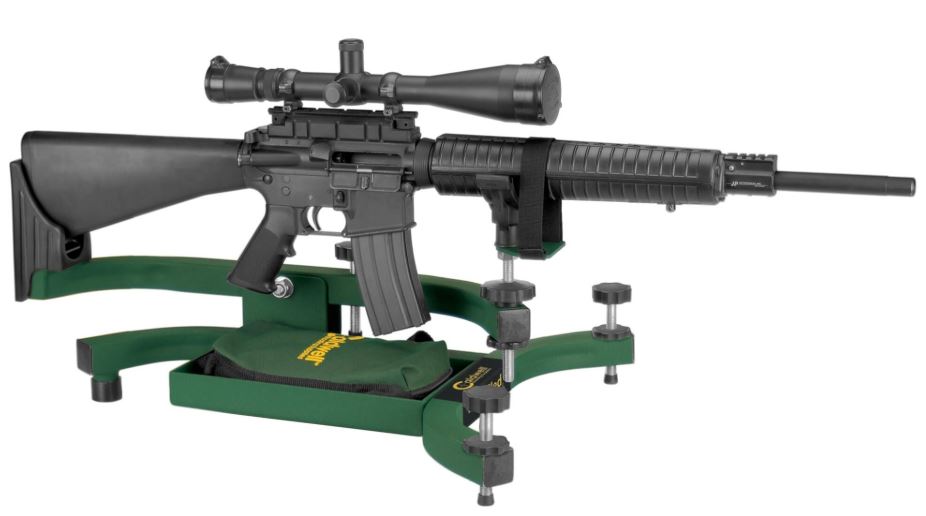 Thanks to its offset design and various points of vertical adjustment, the Solo's small profile still caters to lever guns, and bolt-action and semiautomatic rifles. It will comfortably fit most long guns equipped with up to a 30-round magazine. The weight tray is rated to hold 25 pounds, which works in tandem with a heavy-duty spring hidden between the frame members to mitigate felt recoil. 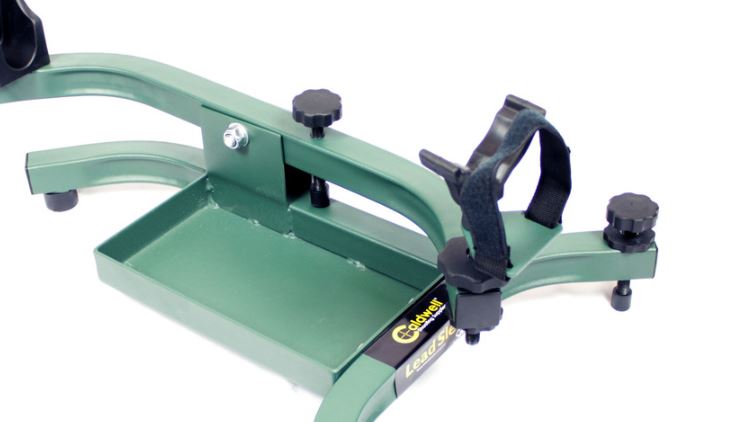 The front cradle is constructed from a heavy-duty but pliable rubber, molded to generally fit well with the typical black rifle's handguard, as well as any synthetic or wood stock. An adjustable hook-and-loop strap provides the cinch for clamping the front end down tight to prevent movement when firing. 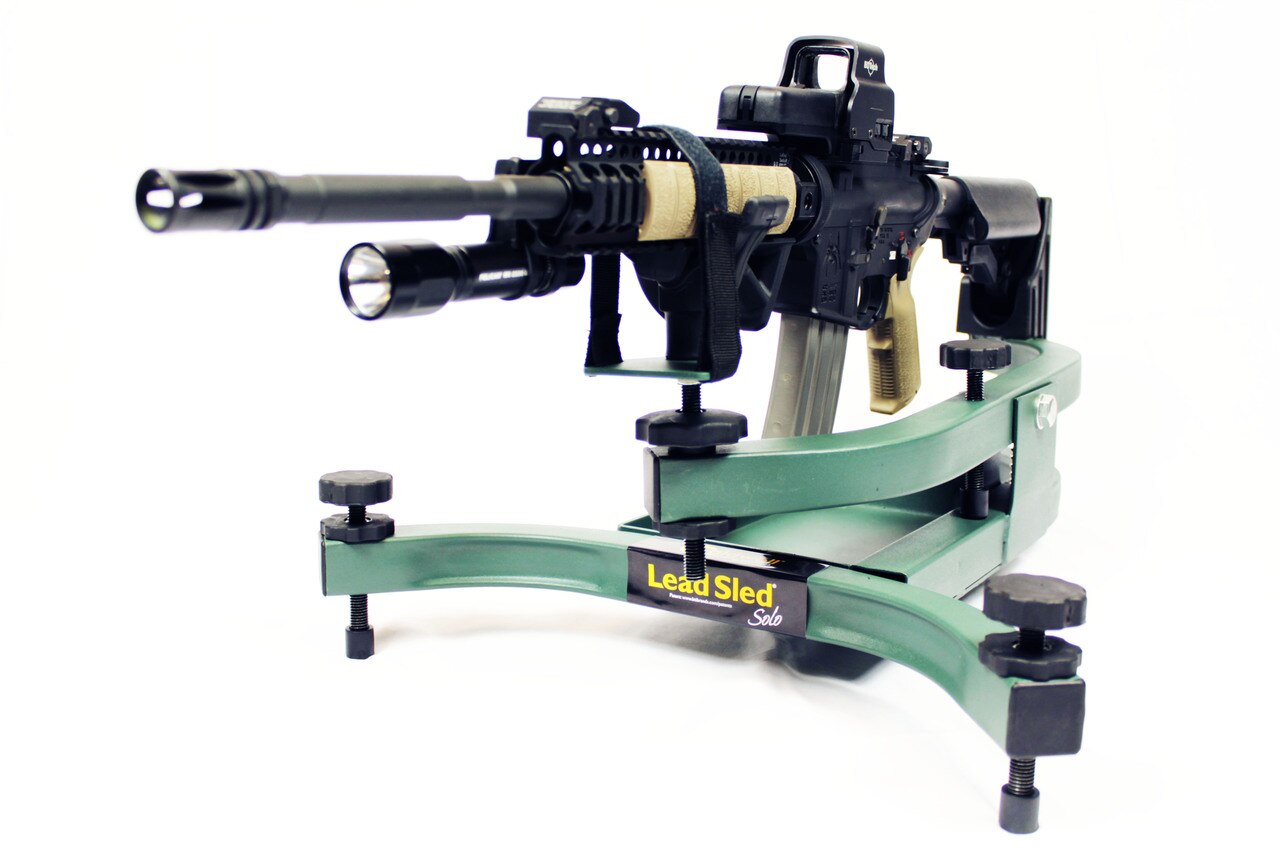 Although perfectly capable and adequate enough for any .22-cal or .30-cal rifle, we found the Velcro can lose some grip if it gets too dusty or dirty. An occasional soap-n-water soaking and cleaning, or even a replacement strap with stronger "bite" provides an easy fix. 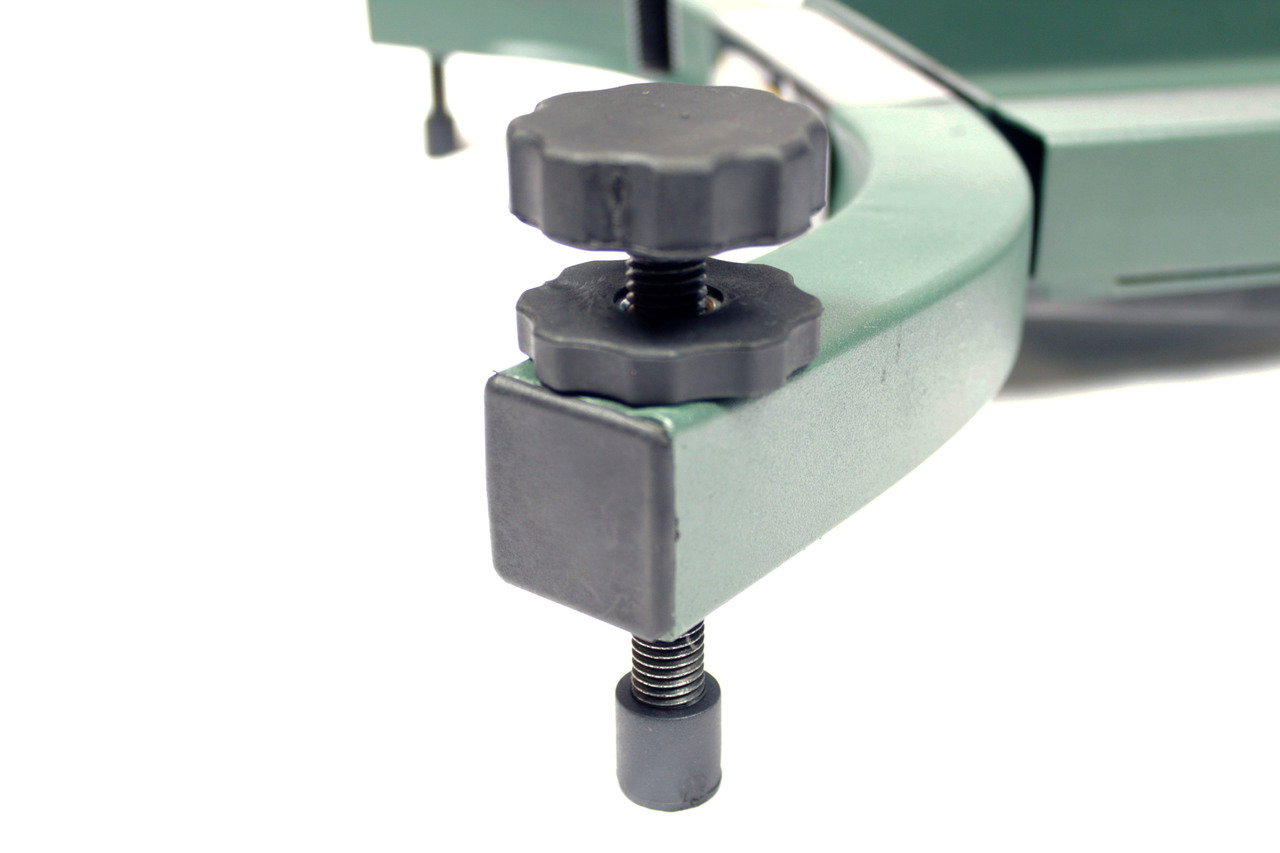 The front end of the Solo's supported with two threaded steel legs capped with soft rubber pads. Each leg is individually adjustable to achieve a level shooting platform on any bench or uneven terrain. Each leg adjusts with a hand knob, with a second tension knob tucked underneath to the height of each leg once set to the proper height. 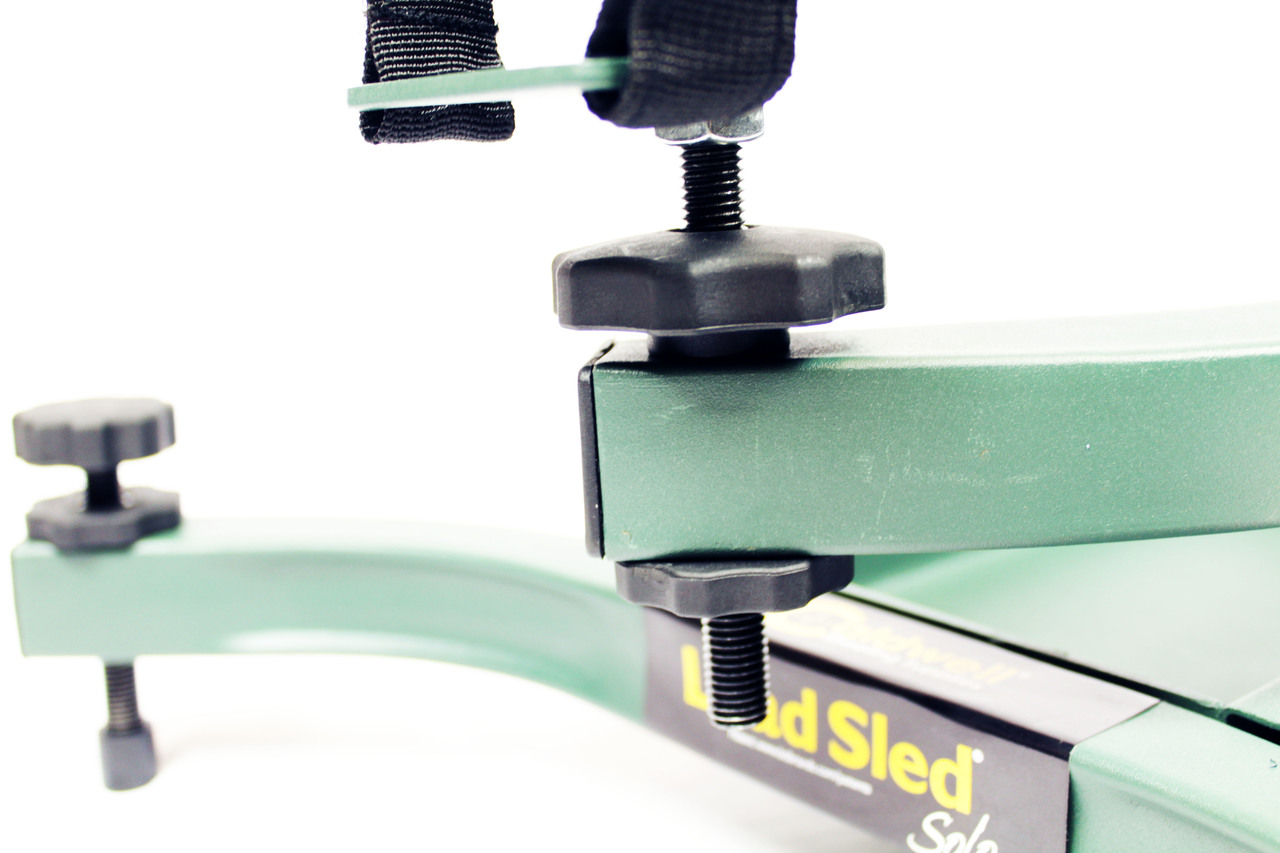 A similar setup is provided to adjust the front height of the cradle. It utilizes the same type of adjustment knobs as each front leg, with one providing a lock on the height to prevent shifting once you're dialed in. 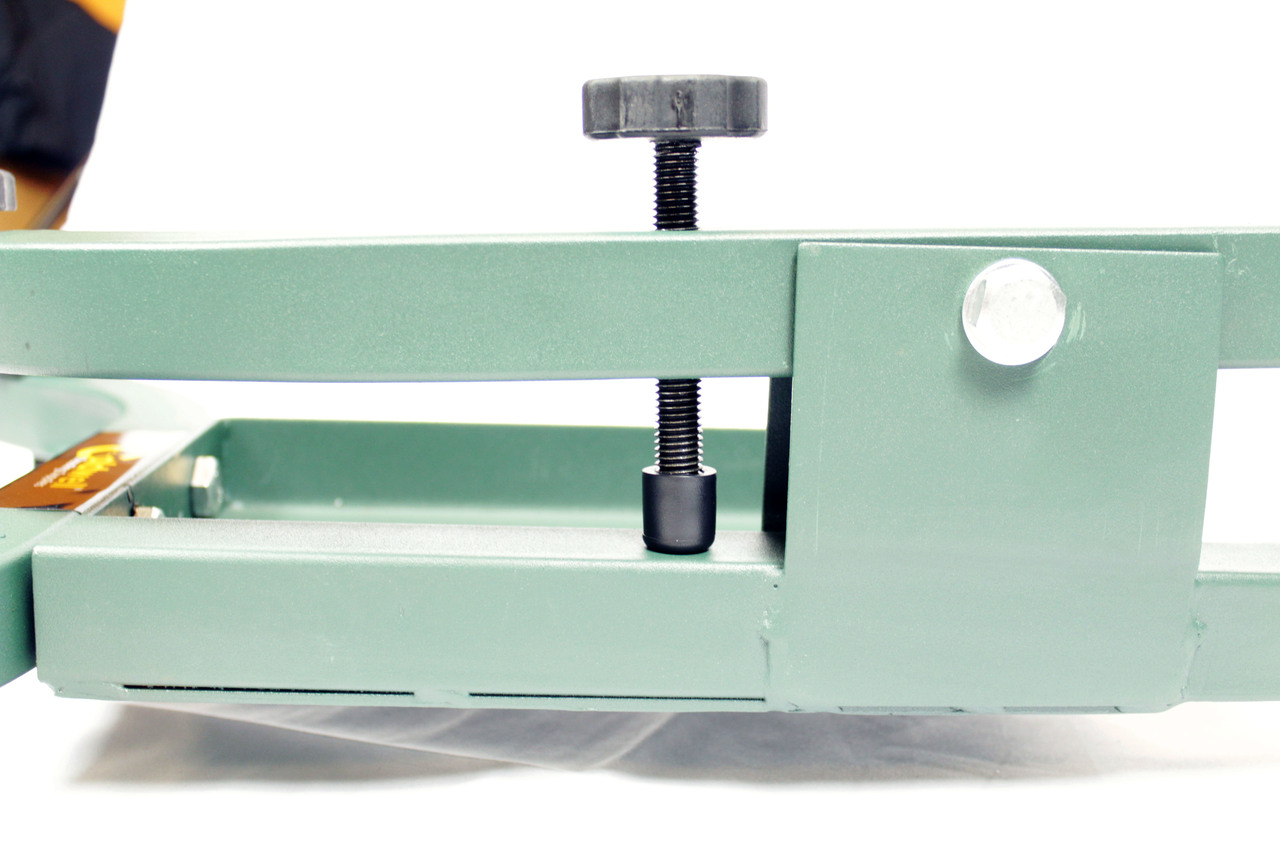 Adjustments are the recurring theme with this deceptively simple shooting sled. The next one is found in the main arm that supports your rifle: The same type of threaded steel knob provides a pivoting elevation adjustment to basic up-down movements to acquire your target at distance. The bottom of the elevator is also capped with soft rubber to prevent it from marring the surface of the frame below. No secondary locking knob is provided for the elevator, but we found the combined weight of the average rifle and the arm itself negated any need for one to prevent the elevator from rotating. 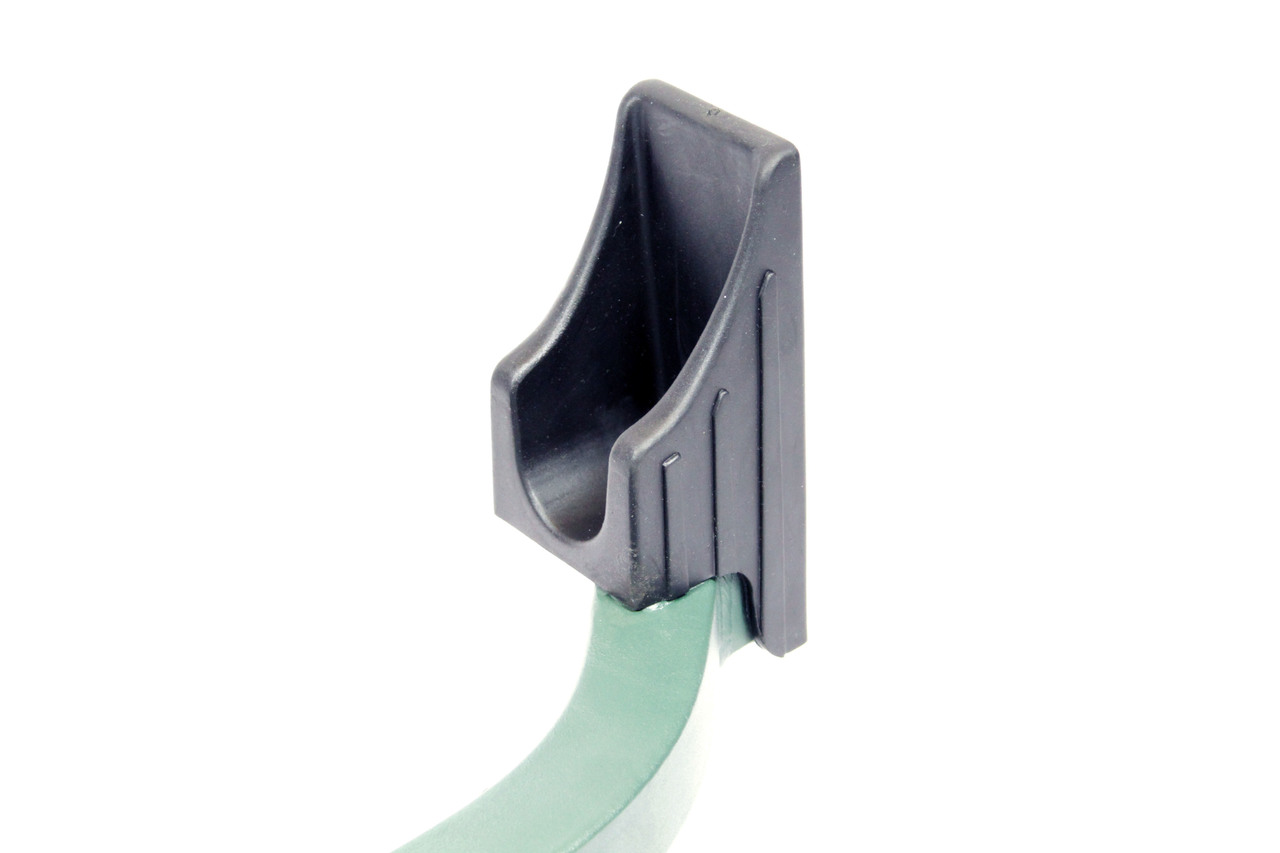 Lastly, out back we have the buttstock rest: It's made from the same rubber as the front cradle, providing a balance of rigidity and recoil mitigation. The overall shape and profile of the buttstock rest was made to favor the typical black rifle buttstock: The cut-away on either side of the rest allows for those wider cheek rests often found on AR-type stocks to seat properly. Of course, the rest also properly fits the thinner stocks found on most bolt guns and lever-actions, albeit with a little bit of wiggle room. We would've liked to see a second tie-down or Velcro strap for the rear end to help take up some of that inevitable slack, though stability is still easily achieved with a simple grip and cheek weld when you're looking downrange. 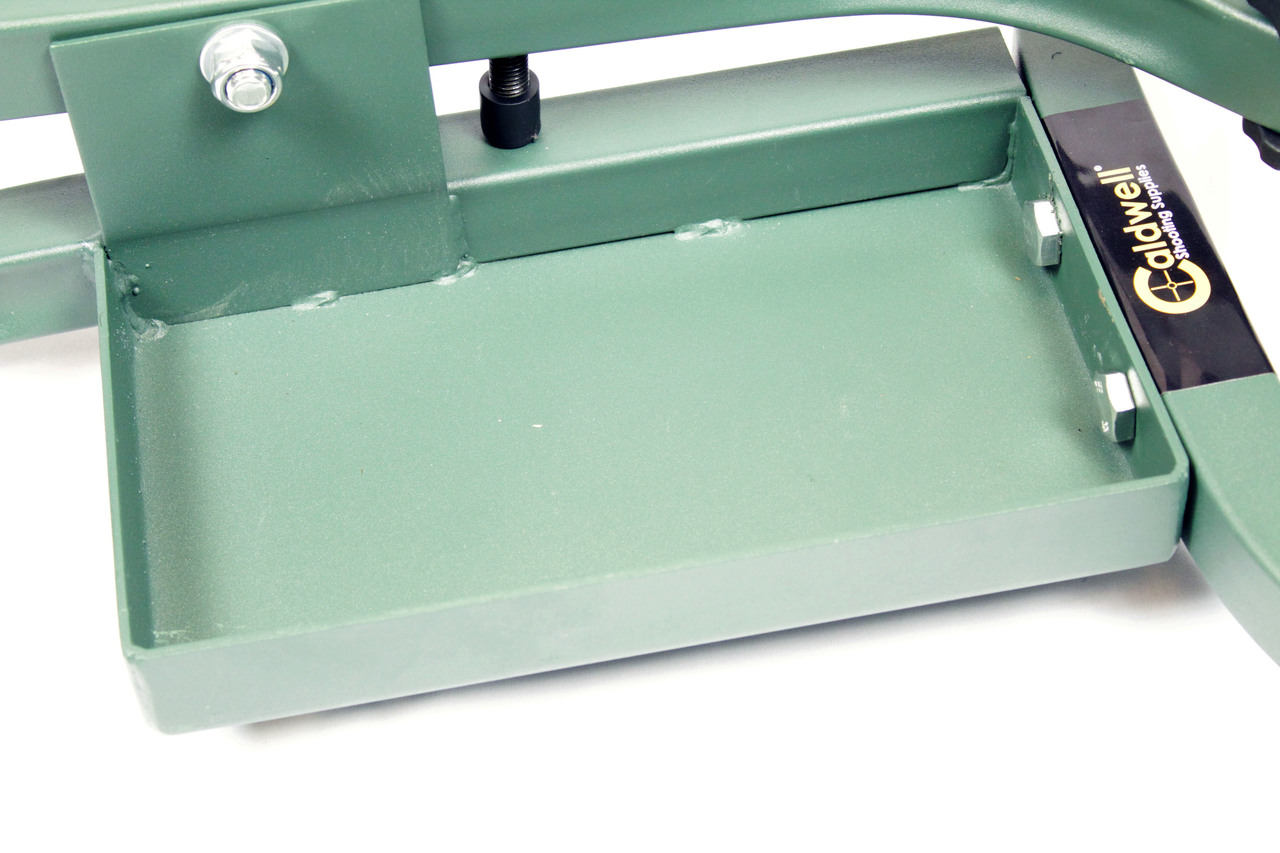 Last up is the foundation of it all, the weight tray. Caldwell says the tray is capable of holding a 25-lb. bag of lead shot, but you can use any improvised weight to keep the sled from moving. We found around 15 pounds of weight is plenty for keeping any .223 or 5.56 rifle from moving the sled when fired. If you like to pump a little iron at home, you can even use a few of those 1" CAP dumbbell weights to good effect (that's what we did). We were also happy to find how thick the Solo's steel plating was, especially for the weight tray. In combo with its welds, Caldwell's sled resists bending or getting "springy" once loaded down. This is important if you're working some bigger loads (like .30-06 or .45-70), which can require some heft to keep your sled from shifting with all that recoil. 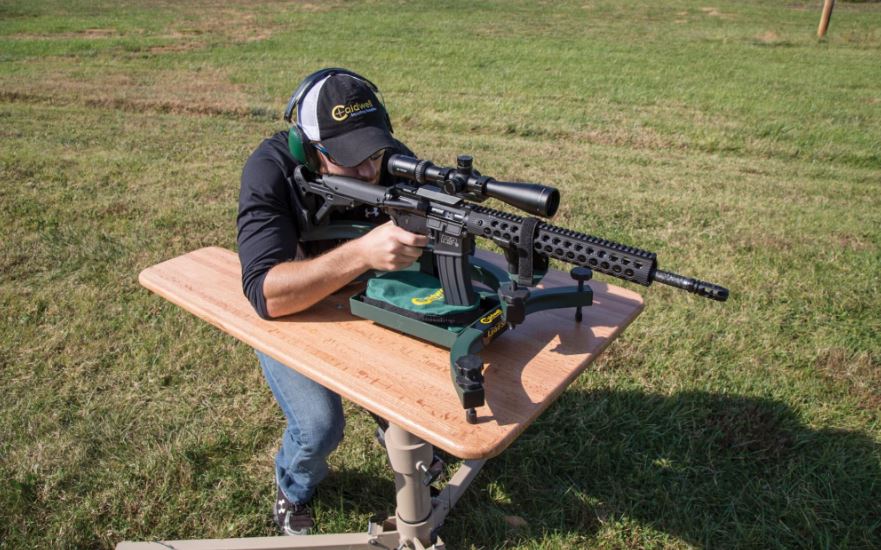 If all shooting sleds were otherwise equal, then the biggest advantage of the Solo sled would be its compactness. It's perfect for the shooter who might be traveling light or shooting from a bring-along bench, rather than a fixed concrete pad like most ranges afford. At 14 pounds, it's light enough to carry and with its 26" x 18" profile, it's small enough to strap to a MOLLE backpack. 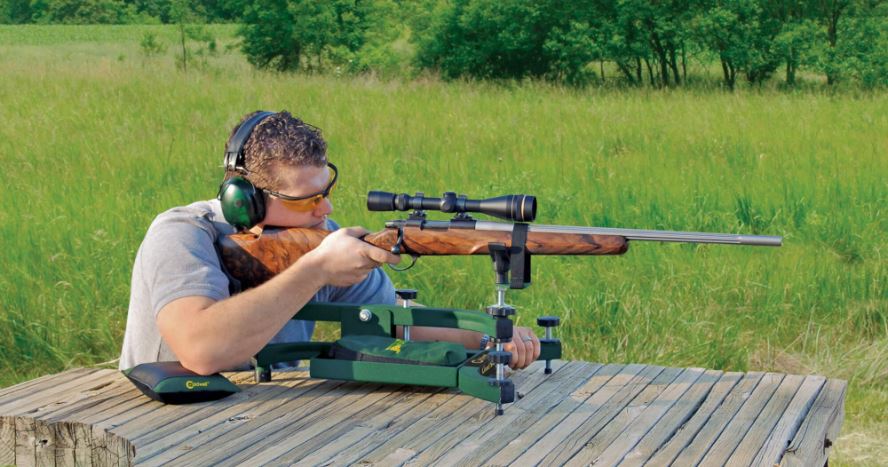 If you're the shooter who brings along your own bench to the range or private land (most carry-along and folding shooting benches are much smaller than your average range benches) the Solo is a great companion. With three points of vertical adjustment, it can handle target acquisition at just about any elevation and distance, making it a versatile sled for a variety of calibers.

First, the good: We love the price of this sled. For "bang for the buck", the Lead Sled Solo is probably the best shooting sled for under $100. We've tried other sub-$100 sleds and they simply don't pack the same kind of heft and stability (or adjustments) for getting a great position and making those consistent hole-on-hole shots. We were able to push out to 300 meters and test our 5.56-chambered AR without any jitters while looking down the scope, and without having to reset the sled or shimmy up and lose sight picture after each shot. Groups were tight and the bench held its own. We didn't throw any shoulder-bruising calibers atop the Solo, but it managed up to .308 and kept itself rock-solid. The sled did a great job mitigating recoil and we felt comfortable keeping shoulders pressed on this thing for extended periods of time.

That brings us to another point most might not consider: The Solo is a great tool for getting new and younger shooters comfortable with the sport. Its compact profile and ability to size up smaller .22-cal rifles makes the Solo a great confidence builder for anybody who might be afraid of recoil while they learn the fundamentals of shooting long guns.

Next, the bad: Thin buttstocks can wiggle inside the rear mount if you're not keeping a tight grip. While this wasn't problematic while shooting a .30-caliber, we imagine bigger guns might want to jump around unless you've got a tight grip. This can be remedied by getting a second Velcro strap to wrap around the main steel arm and your buttstock, but we would've liked to see that integrated into the sled itself. Depending on the height of the shooter (and height of the gun), you might have difficulty swapping out long magazines unless you remove your lead shot or weights from the tray.

We give Caldwell a pass on this, though, since dropping the weight tray lower than the rest of the sled's frame would have had some negative consequences: The Solo would've been less rigid, and the reduced adjustability of the front legs and the minimum height of the gun rest would've suffered. This would've actually made it more difficult for smaller shooters to get comfortable. If we're getting very nit-picky, we also would've liked to see some grease accompany the threaded fittings on the Solo. Even though the rig is powdercoated, the fasteners for the pivot elevator, cradle, and legs are not. They are made from stainless but if you're in a humid environment, shooting in the rain or snow frequently, or leave your sled in storage for a winter, you might see some rust spots develop on the threads or holes if you don't oil or grease them up. This is also a simple fix.